Europe’s Vaccine Roll-Out Is A Failure When Compared To The Vaccination Programs In The U.S. And The U.K.

zekal3_3 2021-04-04 Fashion, Life & Love Comments Off on Europe’s Vaccine Roll-Out Is A Failure When Compared To The Vaccination Programs In The U.S. And The U.K. 33 Views 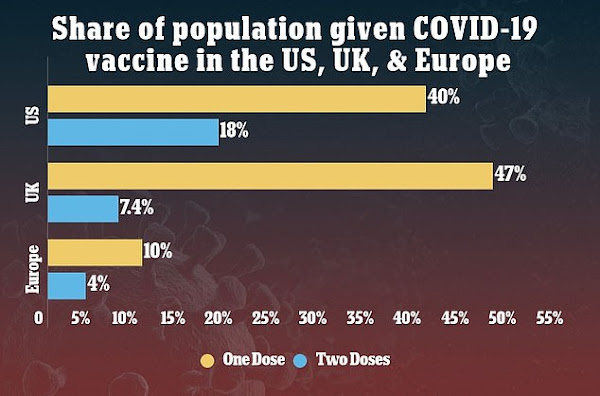 The UK is leading the vaccination drive with more than 47% of its population having had one dose. The U.S. has had around 40% vaccinated while Europe trails at 10%
Daily Mail: The U.S. leaves Europe in its dust with 40% of its population now vaccinated compared to continent's 10% – with a lockdown in Italy and curfew in France
* US officially vaccinated 100M citizens with one or more dose of COVID-19 shots * About a third of American adults will have some degree of COVID protection * About 17.5% of Americans are now fully vaccinated against the disease CDC said * In Europe the rollout has been far slower with only 10 per cent of Europe's total population receiving one vaccine dose, and four per cent receiving two * Europe has seen delays with vaccine rollout with a production shortage * A fear of a higher incidence of blood clots with AstraZeneca has led to halting of vaccination using that particular brand of jab * There is a high degree of 'vaccine hesitancy' throughout the continent with only 36% agreeing the vaccines are safe compared with 49% of Americans
The United States reaped the fruits of its vaccination campaign against Covid-19 on Friday with 40 per cent of the population having received their first jab as it became the first nation to reach 100 million people with shots.
But Europe's roll-out has faced fresh obstacles in recent days.
Only 10 per cent of Europe's total population, around 75million people, has received one vaccine dose, and four per cent, around 30 million people, have received two, according to the World Health Organization.
The WHO director for Europe, Hans Kluge, on Thursday called the roll-out 'unacceptably slow.'
Read more ….
WNU editor: You can say that again …. Europe’s stumbling vaccine rollout provides a lesson in EU politics (CNBC)Original Article