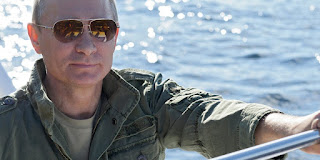 Moscow Times: Putin Named Russia’s Hottest Man
The thirst is real for Russians who still want “someone like Putin” after all these years of bare-chested horse riding and rugged hunting excursions.
According to a poll by the Superjob.ru job board published Friday, 18% of men and 17% of women surveyed named President Vladimir Putin as Russia’s most handsome man.
The 68-year-old bachelor is the only individual to receive double digits in the open-ended questionnaire. Nineteen percent of men named themselves as Russia's most handsome man, while 18% of women said there are no handsome men in Russia.
“Russians still call Vladimir Putin the most attractive famous man in the country,” Superjob.ru declared, despite the 1% dip in his rating from last year.
Read more ….
Update #1: Russian poll finds Putin is Russia’s sexiest man (FOX News) Update #2: KREM OF THE CROP Vladimir Putin voted Russia’s sexiest man in poll of 2,000 Russians (The SUN)
WNU editor: 18% of Russia’s men and 17% of its women said that Russian President Putin was the country's most handsome man. Which means that 82% of men and 83% of women did not vote for Putin in the poll.
But the number that caught my eye in this poll was this …. 18% of women said there are no handsome men in Russia.Original Article