What The U.S. Military Can Learn From The Nagorno-Karabakh War 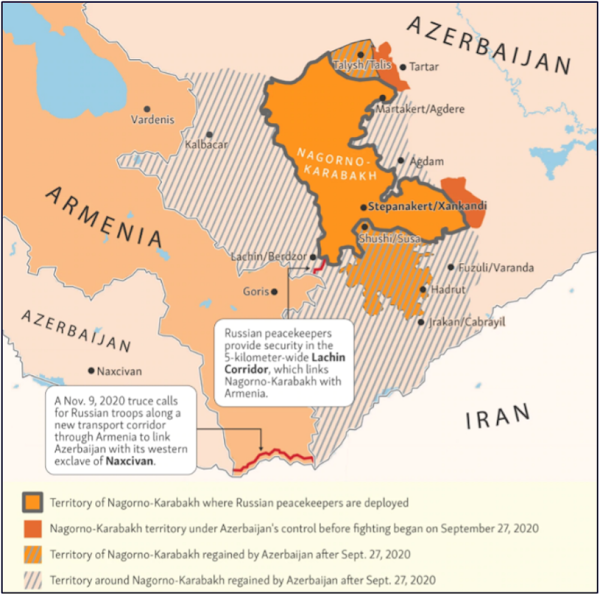 New map of the Nagorno-Karabakh region as of December 1, 2020. Source: Radio Free Europe Radio Liberty
Nicole Thomas, LTC Matt Jamison, CAPT(P) Kendall Gamber, and Derek Walton, Small Wars Journal: What the United States Military Can Learn from the Nagorno-Karabakh War
Background
On September 27, 2020, intense fighting erupted between Azerbaijan and Armenia when the Azeri military went on the offensive. The Azeris’ objective was to recapture the territories lost to Armenia in 1994. But to understand the underlying reasons for the current conflict, one must look back to the root of hostilities and to the role of other powers in the region.
Read more ….
WNU Editor: A must read post. Bottom line. Azerbaijan's military won the war because they had better training, more advanced weapons, and they deployed special forces deep into Nagorno-Karabakh territory that helped in targeting Armenian forces with artillery. They also had the military and intelligence backing of Turkey. But what really changed the dynamic of the war was the use of drones. The key point in the above post is the following ….
…. The resounding success of UAS in the Nagorno-Karabakh War marks what many consider to be a turning point in modern warfare. For the first time in recorded history, nearly all battle damage was inflicted by unmanned platforms. The attrition of forces and equipment by UAS led to a decisive Azeri victory.Original Article