Orbital changes are responsible for Milankovitch cycles that make Earth move in and out of periods of glaciation, or Ice Ages. Summer insolation on the Northern Hemisphere reached a peak some 10,500 years ago, in line with the Milankovitch cycles, and insolation has since gradually decreased.

In other words, the snow and ice cover acted as a buffer, moderating the temperature rise. While this buffer has declined over time, it is still exercizing this moderation today, be it that the speed at which this buffer is reducing in size is accelerating, as illustrated by the image below, showing the rise of the sea surface temperature on the Northern Hemisphere.

Will the snow and ice cover ever grow back?
More recently, the temperature rise has been fueled by emissions caused by people. While emission of greenhouse gases did rise strongly since the start of the Industrial Revolution, the rise in emission of greenhouse gases by people had already started some 7,000 years ago with the rise in modern agriculture and associated deforestation, as illustrated by the image below, based on Ruddiman et al. (2015).

The temperature has risen accordingly since those times. As the image at the top shows, temperatures appear to have risen by 0.3°C, compared to some 6000 years before the Industrial Revolution started. When also taking into account that the temperature would have fallen naturally (i.e. in the absence of these emissions), the early temperature rise caused by people may well be twice as much.
Temperatures could keep rising for many years, for a number of reasons:

Paris Agreement
All this has implications for the interpretation of the Paris Agreement. At the Paris Agreement, politicians pledged to take efforts to ensure that the temperature will not exceed 1.5°C above pre-industrial levels.
So, what are pre-industrial levels? The 'pre-' in pre-industrial means 'before', suggesting that 'pre-industrial' refers to levels as they were in times befóre (as opposed to when) the Industrial Revolution started. Carbon dioxide and methane levels actually started to rise markedly about 6000 years ago, as illustrated by the images from Ruddiman (2003).
A huge temperature rise by 2026?
A recent post suggests that the 1.5°C threshold was already crossed in 2012, i.e. well before the Paris Agreement was adopted by the U.N. (in 2015), while there could be a temperature rise of more than 3°C by 2026.
Such a rise could be facilitated by a number of events and developments, including:

• The Arctic sea ice latent heat tipping point and the seafloor methane hydrates tipping point look set to get crossed soon (see above image).
• Continued emissions. Politicians are still refusing to take effective action, even as greenhouse gas emissions appear to be accelerating. The warming impact of carbon dioxide reaches its peak a decade after emission, while methane's impact over a few years is huge. 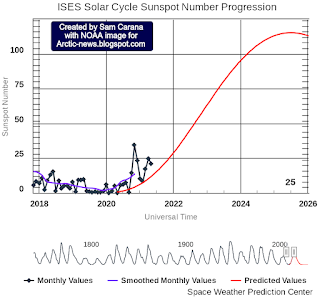 • Sunspots. We're currently at a low point in the sunspot cycle. As the image on the right shows, the number of sunspots can be expected to rise as we head toward 2026, and temperatures can be expected to rise accordingly. According to James Hansen et al., the variation of solar irradiance from solar minimum to solar maximum is of the order of 0.25 W/m⁻².
• Temperatures are currently also suppressed by sulfate cooling, and their impact is falling away as we progress with the necessary transition away from fossil fuel and biofuel, toward the use of more wind turbines and solar panels instead. Aerosols typically fall out of the atmosphere within a few weeks, so as the transition progresses, this will cause temperatures to rise over the next few years. 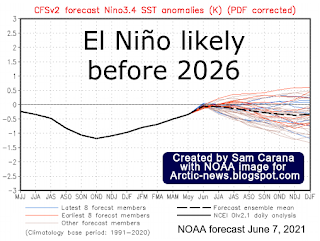 • El Niño events, according to NASA, occur roughly every two to seven years. As temperatures keep rising, ever more frequent strong El Niño events are likely to occur. NOAA anticipates the current La Niña to continue for a while, so it's likely that a strong El Niño will occur between 2023 and 2025.
• Rising temperatures can cause growth in sources of greenhouse gases and a decrease in sinks, as discussed in an earlier post.
The mass extinction event that we are currently in is rapidly progressing, even faster than the Great Permo-Triassic Extinction, some 250 million years ago, when the temperature rose to about 28°C, i.e. some 14.5°C higher than pre-industrial.
In the video below, Guy McPherson discusses the current mass extinction.