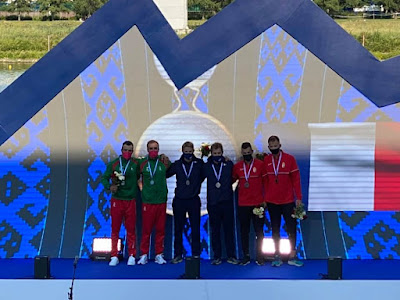 The very well organised European Championships in Moscow brought joy to the teams of France, Hungary, Portugal and Poland who celebrated medals on the last competition day.

Hungary picked up gold medal in men’s C2 event thanks to Marton Kover and Marton Horvath, who were two minutes faster than all the other crews. Rui Lacerda and Ricardo Coelho from Portugal were second, while bronze medal went to Poland with Mateusz Borgiel and Mateusz Zuchora. Borgiel and Zuchora were the defending champions from 2019.

The other two races that were held today were unfortunately not official events, because not enough countries participated in event to fulfil the requirements of being official race. In women’s K2 race legendary Renata Csay and Zsofia Czellai produced the best time and claimed the win at a 26.2 kilometres long course. Csay and Czellai are the defending European champions but will have to wait another year to officially defend their title.Amelie Kessler and Yseline Huet from France were second in this event, while Rebeka Szmrtyka and Panna Sinko from Hungary finished third.

The 2022 ECA Canoe Marathon European Championships will be held in Denmark, more precisely in Silkeborg.