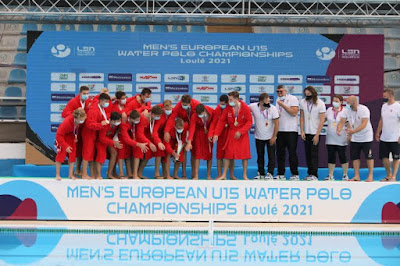 A week after the girls’ win in Szentes, the Hungarian boys also made it to the top at the European U15 Water Polo Championships in Loule (POR). The Magyars are also 2/2 in this event as they had won the inaugural edition two years ago as well. Now they beat Spain with ease in the final, 10-5, while Greece clinched the bronze by defeating Croatia.

Among the youngest ones, Hungary made a double in two weeks: after the girls had downed the Russians 7-6 a week ago, now the boys enjoyed a fine tournament by winning each of their matches.

En route to the final, their toughest encounter was their semi-final against Greece where they stormed to a 4-0 lead in eight minutes but the Greeks, who had bested Italy in the QF, came back to 11-10 in the fourth – however, the Magyars had the last laugh (12-10). In the quarters their task was easier than expected since they faced Turkey which caused the biggest upset by ousting Montenegro in a shootout in the crossovers.

In the other end of the draw Spain came on a rocky road, first they edged out Serbia 9-8 and managed to take the upper hand against Croatia 10-8. The Croats then went down against the Greeks in the bronze medal match 11-7.

The final was a lop-sided contest, after a balanced first period the Hungarians staged a 4-0 surge to go 7-3 ahead and the Spaniards could never recover from that. After 3-3, the Hungarians kept the Spanish on a single goal for 23:01 minutes and went 9-4 up during that phase to secure a second title after winning the initial event in Burgas (BUL) two years ago.

More LEN age-group events are due this summer and in the autumn: the European Junior Open Water Swimming Championships are to be held in Paris on 22-25 July, while in Water Polo the junior Europeans for the women are scheduled for 22-28 August in Sibenik (CRO).

The men will play on 12-19 September in Malta, and a youth artistic swimming Europeans are to be staged in Rijeka (CRO) on 9-12 September.